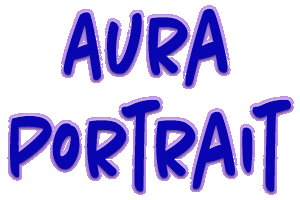 This sample aura portrait will give you a general idea of what your portrait will be like. Each portrait presents information from different layers of your auric field. The most important imprints will be shared during your reading. Readings are done via audio recording. 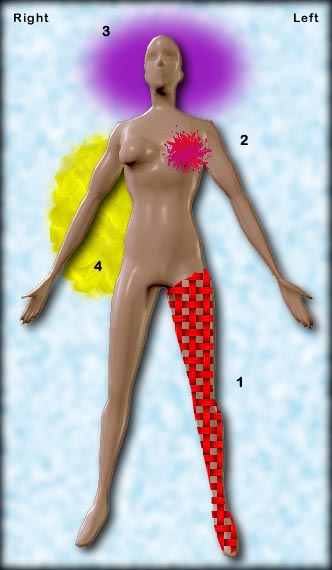 1 Left Leg – Red band wrapped around leg
This is from a past life experience, it was physical in nature, perhaps something as severe as the leg being crushed by something heavy. The release and lesson contained within this has to do with putting yourself out in front by having the courage to take a step forward, initiating an action that you have been resisting doing because of fear. Try to remember that the fear is an illusion. The accident occurred because you hesitated and as a result your were permanently held back from having to actualize your goal — self-fulfilling prophecy.

Suggested action: Take small steps if only within your own consciousness to move forward. Visualize unwinding the red cord from your leg.

2 Left Upper Chest – Red with purple threads
Indicates that a deep hurt existed here and that a higher vibration of thought has been working to dissolve it. The hurt was from a relationship that caused great pain and continued to grow over several lifetimes manifesting the same feelings.

Suggested Action: Continue whatever forgiveness work you are currently doing as it appears to be working. Visualize the purple color surrounding the red and transforming it.

3 Above Head – Purple Glow
Indicates an intense amount of spiritual energy being concentrated around the head. This means that your thoughts are focusing on spiritual matters either consciously or unconsciously.

Suggested Action: This is a particularly good time to meditate or sit in quite contemplation and simply allow those vibrations to surround your head – imagine opening your crown chakra and as you inhale bring the purple color into your body. You can direct the color to any area you chose for healing.

4 Right Side – Golden Glow
Indicates some past healing work that you have done. It is acting like a protective coating around this area in order to be sure that the healing will be permanent. There was some kind of deformity there that created a feeling of contraction. It could be experienced as cramping in the colon and intestine area. There was severe physical damage at one time many, many lifetimes ago.

Suggested Action: This energy is activated when confronted with letting go issues. Visualize that physical area stretching and expanding as you breathe into it, affirming that letting go is pleasurable and enjoyable.

Back to Aura Portrait